A Spoonful of History 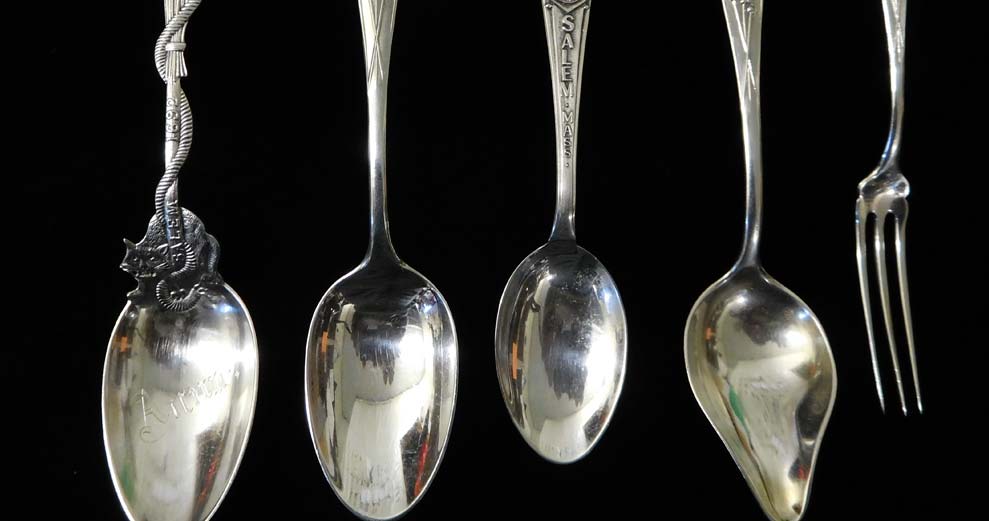 Regarded as the first souvenir of the 1692 Salem Witch Trials, the sterling silver “witch spoon” was created and sold during the late 1890s in Salem, Massachusetts, by Daniel Low & Co.

Beyond its significance within local Salem history, this spoon is also typically regarded as the first design to spark the souvenir spoon craze in the United States. Following Low’s initial witch design, American manufacturers began producing dozens of collectible spoons that quickly became an extremely popular tourist keepsake across the U.S.

The first spoon design was commissioned by Low in 1890 following a trip abroad. As the story goes, the idea to produce the souvenir spoons originated from the observation of the burgeoning trade of commemorative silver spoons within the European tourist market. Upon returning home, Low commissioned Ww. B. Durin & Co. to design a singular souvenir spoon. These spoons are decorated with a simple interpretation of the now stereotypical witch astride a broomstick, alongside the word “Salem.” A tea spoon of this first design cost $2 in 1890; when adjusted for inflation this spoon would cost approximately $54 in 2018.

With the massive success of the first spoon’s design, Low went on to commission Gorham Silver to create a second, more ornate design the following year. This succeeding pattern consists of a more substantial, intricate design, as it depicts a black cat with an arched back, a rope, a broomstick, the addition of both the place and date of the witch trials, and the witch flying aside a half moon. This design was an instant success and considerably overshadowed the simplistic first pattern. With the success of these designs, Low registered the “witch” trademark as U.S. Patent No. 18,838 in 1891, making him the first manufacturer to produce a souvenir denoting Salem’s witch-related past.

Opening its doors in 1867, the Daniel Low & Co. business was located at 231 Essex Street, the modern day location of the restaurant Rockefella’s. The emporium specialized in high-class, elegant goods, ranging from small trinkets such as silver thimbles and pins to the more intricate silver hair combs and diamond fitted jewelry, china sets, watches, writing sets, pocket knives and far beyond. Daniel Low (1842-1911) was a savvy businessman and brilliant innovator, particularly notable for his use of mail-order catalogues, which he titled the “Year Book.” These catalogues are cited by some as the first of their time, which Low distributed both across the country and abroad.

The Salem Witch Museum currently has these beautiful antique spoons in a small exhibit devoted to the history of Daniel Low, his Salem business, and the legacy of these remarkable spoons.