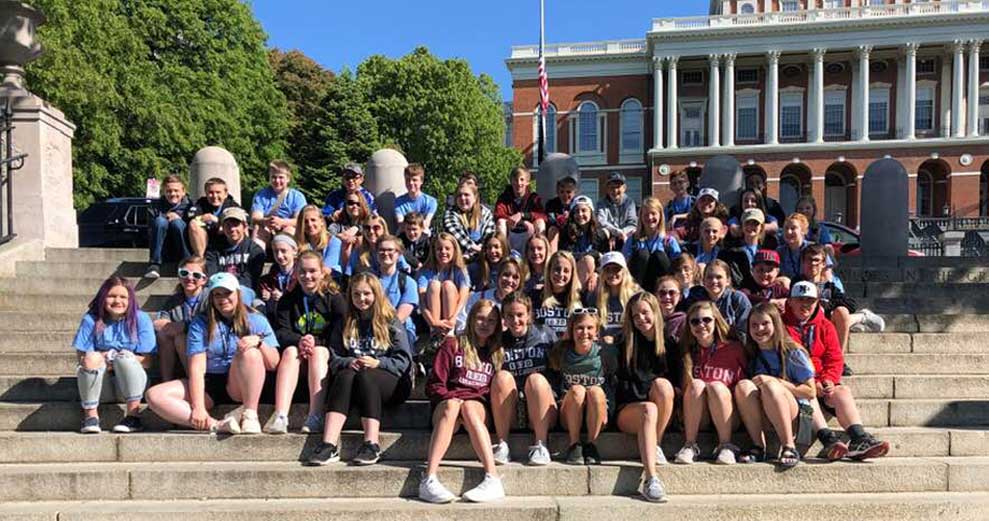 You don’t have to do it all alone.

When Jeremy Biermaier wanted to start a student travel program at New Prague Middle School in Minnesota, he immediately went to his friend and colleague, Jeremy Kalal. Ever since, for the past five years or so, they’ve made the annual East Coast trips happen. That is, of course, until COVID hit.

Now, the two are navigating the pandemic together as well. And despite having to put last year’s trip on hold, they’re still just as excited to travel again in the future.

New Prague is a relatively small community not too far from the Twin Cities. Every year, Kalal and Biermaier take a group of incoming 7th and 8th graders east, alternating each year between a Philadelphia, Gettysburg, Baltimore and D.C. trip, and a Boston and New York trip. The kids love it.

“When we started this, we were hoping they’d have an experience they’ll remember for a long time, and get to experience something that their parents may not take them to do,” Kalal said. “I mean, every year, we have a dozen kids that have never been on an airplane before. So it’s eye-opening for a lot of them.”

Coming from a town where the students have possibly never even interacted with an unhoused person, these trips definitely help the kids get outside of their bubble socially and culturally.

“There are boys and girls who have never been to a play or think theater is dumb, and then you go and see Wicked on Broadway, and they’re talking about it; they’re excited about it.” Biermaier said.

That’s what it’s all about for these two. Of course, there are endless funny stories to tell—but what really sticks with the Jeremy’s are the impactful moments. When we’re in middle schooler, we like to act tough or cool. But when those same students experience a trip on the size and scale of New York City or D.C., it’s a whole new world.

“I like when we see the kids at Arlington National Cemetery, and the Holocaust Museum. Because you can tell, even the kids that are trying to put up the toughest front, it hits home with them,” Kalal said.

That’s why COVID impeding last year’s trip felt like such a blow. The group hopes to make the trip this upcoming June in some capacity, with more than 70 students signed up, but they’re well aware anything could happen.

The one question on everyone’s mind right now is trip insurance—either prices go up to cover something calamitous like the pandemic, or they stick with the usual plan and hope for the best. Kalal said it feels like they’ll be starting from scratch after this, working to reestablish the certainty and success stories required to fill future trips.

On the other hand, they’ve learned a lot along the way. They now know how long it can take to make a trip actually happen. There’s a lot of time spent working with the school board up front, raising money, and answering questions from parents.

They’ve also learned how to facilitate fundraising, giving kids opportunities to raise money (such as selling Papa Murphy’s pizzas) while leaving the responsibility of handling that money to the students and their families. Speaking of parents, Biermaier and Kalal strongly suggest having teacher chaperones, rather than parents.

“The kids at this age, it’s okay to be away from home a little bit. We have kids who, it’s the first time they haven’t slept in the same place as their parents. And if there’s a problem with who gets what bed, it’s okay for the kids to work that out.”

It’s all a balance of helping the students and parents, without getting overwhelmed yourself. One huge aid has been Global Travel Alliance, which has helped New Prague “immensely” in all their travels, but especially during the pandemic. While Kalal and Biermaier are dealing with teaching, coaching, leading student council and so on, their friends at Global Travel have all the passion and time in the world to focus on travel issues.

The workload is also why they handle student travel as a duo. Kalal handles the finances and administration issues, while Biermaier tends to handle communications and organizing. For as much advice as they have, their biggest tip is to find a partner.

“We’ve been fortunate to have each other to lean on during this time and during travel in general,” Biermaier said. “They can help you when things are going good, but when things are going poorly, it’s tough if all that goes on one person’s shoulders. And let’s be honest, we both had some dumb ideas—you get excited and don’t even think about the seven possible drawbacks there. That’s probably saved us a few times, having another person to help bounce ideas off of.”

“For me, having two of us working on it is a huge lifesaver, because I can’t imagine trying to do all of it by myself,” Kalal added. “If a teacher is going to start something new, if they’ve got someone that they can trust and work with, it’s a huge, huge help.”

Written by Josh Veal for the March 2021 issue of Teach & Travel.