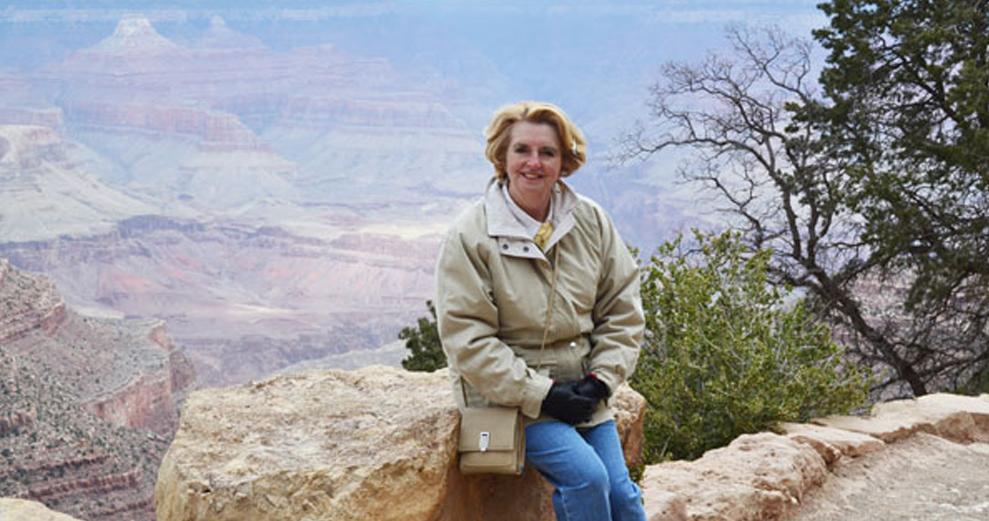 Mary Morgan, author of the National Park Mystery Series, has a passion for traveling. She’s visited 48 of the 50 United States, and has explored 50 national parks. In addition to researching, exploring and writing, Morgan spends her time visiting schools and sharing her knowledge with students. Here, she shares insight on her series, her travels, and the bounty of experiences the national parks offer students.

1. Tell us about your National Park Mystery Series: Who is it for? What inspired the stories?

In my series, the Cooper family from Lansing, Michigan, visit national parks on vacation, a reunion, and even take a class trip to Gettysburg. Ben and Bekka, a set of twins who share an adventurous spirit, work with park rangers to right what might be going wrong at the park. I weave a mystery into the adventure, hoping to create in my readers a desire to explore the park themselves. I feature parks I have visited so, as I write, I throw myself back on a trail or climb a lighthouse to realistically give readers a feel for being there. My inspiration came from traveling around our country as a child and later with my family, wanting to share “America’s Best Idea” with an adventure.

2. What do you love about visiting the national parks, and what experience do you have visiting the parks with youth?

Every national park has a story and uniqueness all its own. The best part is—they are being preserved for people to visit 5, 10, 50 or even 100 years from now, and seeing what we see today.

In addition to years of traveling with our own two children, for the last 10 years my husband and I have taken groups of high school teens from Lansing to do community service in low-income and underserved neighborhoods around the country. En route, we stop at national parks as a travel break to enjoy what the parks have to offer. On our way to Myrtle Beach, we hiked to a mountain top in Cumberland National Park where Virginia, Tennessee and Kentucky converge—proving you can be in three places at once. A trip to Boston wouldn’t be complete without riding the Maid of the Mist at Niagara Falls. We hiked some of the Appalachian Trail, then roasted hotdogs and s’mores while passing through the Smoky Mountains. Goosebumps formed as we heard “America the Beautiful” play after dark at Mount Rushmore. An interesting fact—most of the characters in my books are the teens that have traveled with us. They get excited when they visit the famous places that are in the books.

3. Why do you believe national parks are great destinations for youth travel?

Besides the beauty of Lake Superior and the cliffs at Pictured Rocks National Lakeshore, or the vastness of Mammoth Cave, many national parks have history and geography to learn and experience. We got a good dose of Revolutionary War history walking the Freedom Trail in Boston, as well as learning the reason for our success during the War of 1812 while touring the USS Constitution in the harbor. Walking the fields of Gettysburg and watching a re-enactment threw us back 150 years to the Civil War era. Last summer, we stopped for gas in Pennyslvania and discovered we were within a few miles of the Flight 93 Memorial Site, where the last plane went down on 9/11. Only three teens in our group were alive in 2001, making it current history for them. Just north of Pine Ridge Indian Reservation in South Dakota, we took a break to climb rock formations in 100-degree heat in the Badlands. And the devastation of the flooded Mississippi River took on new meaning as we viewed neighborhoods underwater from 650 feet above in the Gateway Arch in St. Louis, Missouri.

4. If teachers are planning on visiting a national park with their students, how could they incorporate the National Park Mystery Series into their classroom lessons?

Before I write any book, I do extensive research on the park as a refresher on what is there and tie in significant features. Even though the reading level of my books is geared for pre-teens, the history and geography I weave around the plot is beneficial for any age. Many adults read my books and remark, “I didn’t know that.” Bekka, the twin girl in the series, has a travel trivia book and enlightens her family with tidbits of information as they travel to a new park. Many of these tidbits are included in the back of each book in a section entitled “Bekka’s FYIs.”

In my research, I discovered many interesting facts associated with Mount Rushmore: Sculptor Victor Borglum took 400 former gold miners and taught them how to drill into a granite mountain, insert dynamite and then carve it into a face—all while hanging from a rope. Behind one president’s head is a secret vault with four major documents in it. And one face is in a different place because the granite was weak and the initial carving fell off the mountain.

5. Do you have any tips for teaching the National Park Mystery Series?

Two things: Read the book for condensed information on a particular park, and then go to the national park’s website and take notes. So much is offered. There is a section for teachers to download facts on history, science, geography and tips for a field trip. I encourage youngsters to participate in the Junior Ranger program and fill in the booklets they have available. Most can be downloaded before visiting a park. Kids get a lot more out of their trip if they learn about the wildlife, trails and what to expect if they work the assigned projects while there.

With all its wild reptiles, Everglades National Park in Florida is a great setting for a mystery book. After writing Double Trouble in Everglades, I wanted to live it out, so we flew there in January of 2016.

I had read to get the most out of your visit to Everglades you should do the Tamiami Trail Triathlon: hike, bike and canoe in the three main sections. As advertised, alligators came out of the swamp to greet us as we rode our bikes 15 miles around the one and only bike path in Shark Valley. You can canoe around the 10,000 islands, spotting 1000-pound manatees, but don’t get them mad. They flip canoes.

For me, the most exhilarating part of the triathlon was the hike. You can slog in the slough (pronounced slew), which is a fancy way to say “take a hike in the swamp.” You wear long pants tucked into socks, and tennis shoes that can be tied in double knots because of the mucky limestone mud. Usually the swamp water is only eight inches deep, so walking out 100 yards to the grove of cypress trees is not too difficult. However, just before we arrived, 13 inches of rain fell, and the water was waist deep on me.

The paths that followed out to the cypress grove were made by alligators. I am not a brave person and wondered: What had I signed on to?

If you are into science, the Everglades is the place to go. Algae slime is on the surface, along with periphyton and floating apple snail shells. As I tell children in schools, there are thousands of alligators,100,000 pythons and water moccasins in the Everglades—and there are no fences keeping them away from you. When asked about the danger, the ranger told us she hadn’t lost anyone—yet! You couldn’t focus too much on what might be watching you, or you might chicken out. It really was a great science lesson and we survived to talk about it! But I don’t think I will try it again.

Learn more about Mary Morgan and the National Park Mystery Series at www.nationalparkmysteries.com.