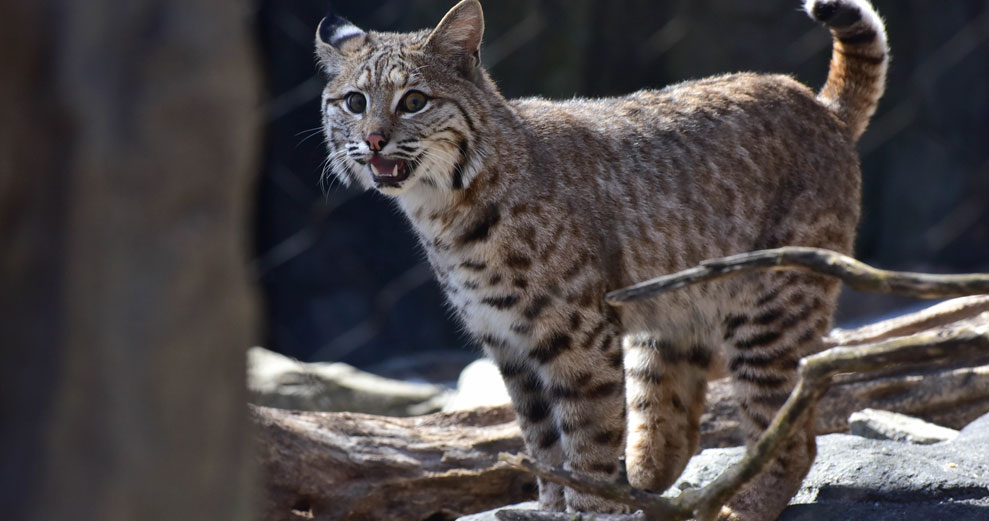 We’ve transformed exhibit space in the Maryland Wilderness, and The Maryland Zoo is once again home to bobcats. Bobcats are native to Maryland and most every other part of North America, too.

Kilgore, the male, still has a lot of kitten in him. He was found by a fisherman in Oregon in June 2016, when he was only a few weeks old. The fisherman turned him over to the Oregon Department of Fish and Wildlife; Kilgore was subsequently taken in by the Oregon Zoo for the short term until he could move to Baltimore.

“Oregon Zoo staff took him in when he was approximately six weeks old and weighed a little less than two pounds,” said Erin Cantwell, The Maryland Zoo’s mammal collection and conservation manager. “While he was definitely underweight for his age, overall he looked to be in good health. However, since he had been found alone at such a young age, he was not a candidate for release back to the wild.”

Josie, the female, came to Baltimore last December from the Tulsa Zoo. She had been living with another female there, but the two had become incompatible. Female bobcats in the wild normally steer clear of each other. Josie is not overly aggressive, but “she is a bobcat with attitude,” Cantwell said. “She engages well with her keepers, but she also lets people know where they stand with her.” She is quite vocal for a cat that is normally silent, and likes to observe from a high perch. It will be interesting to see what lessons she has to teach Kilgore.

The exhibit opened this spring, and it seems both bobcats are enjoying their new digs. Josie is naturally more cautious and prefers the land and ledges, while Kilgore is very interested in the water features and spying on guests from the top of the rocks.

“Exhibit design is equal parts science and art,” said General Curator Mike McClure. “The goal is to create an environment where the animals are comfortable and have the ability to make choices about where they go and what they do. If we do that well, then we create an experience where guests can peek through a window and share in the animal’s world.”

“Zoo guests are amazed to see these two bobcats exploring their new home. They are really special animals,” says Cantwell.

Photo courtesy of The Maryland Zoo.