Cleveland Sets the Stage for the Arts 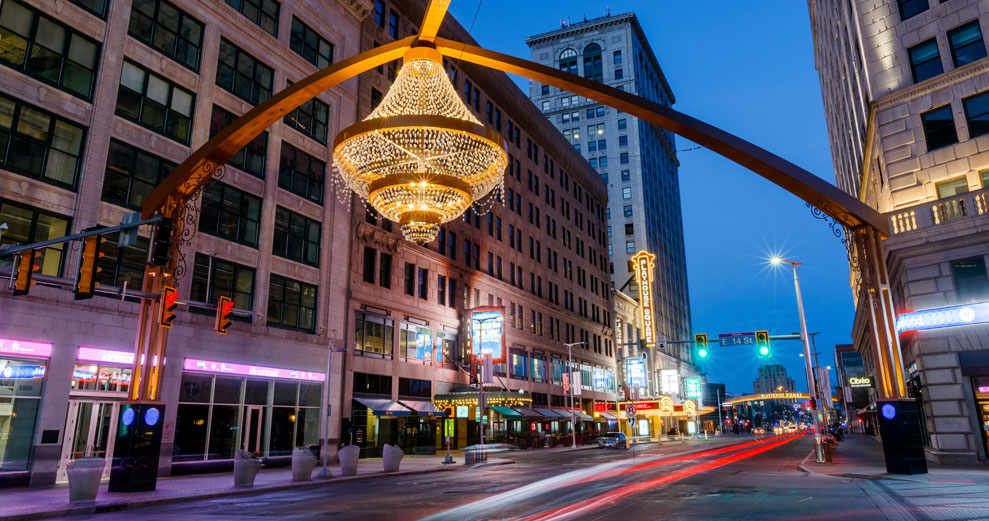 All the world’s a stage, and students can experience top-notch stage productions at Playhouse Square in Cleveland, Ohio. The country’s largest performing arts center outside of New York City boasts nine theaters and hosts more than 1,000 events each year—including the KeyBank Broadway Series and productions from resident companies such as the Tony Award-winning Cleveland Play House and Great Lakes Theater.

The 2017 – 2018 KeyBank Broadway Series is one of only a handful across the country to offer three weeks of each show in Cleveland, providing student groups more scheduling options to see Broadway blockbusters, like Aladdin in May 2018 and Hamilton in July and August 2018 (a six-week run). For select shows throughout the season, Broadway workshops are offered for student groups, and tour planners can work with the Playhouse Square team on other opportunities.

Before taking their seats for the show, students should also be sure to catch a glimpse of the world’s largest outdoor chandelier right outside the theaters.

Cleveland’s arts and culture scene does not end at Playhouse Square. Student groups have the opportunity to listen to the world-renowned Cleveland Orchestra or tour the 100-year-old Cleveland Museum of Art. Lauded as one of the best ensembles in the world, the Cleveland Orchestra gives budding Beethovens and Mozarts a chance to listen to classical music with matinee concerts at the beautiful Severance Hall in the University Circle neighborhood. Students can also enjoy behind-the-scenes tours of the Severance Hall throughout the year.

One of the most prestigious cultural institutions in the city is the Cleveland Museum of Art. It is one of the only nationally recognized museums to offer free admission to its permanent collection, which features more than 45,000 pieces of art from artists like Dali, Monet and Warhol. Students can also enjoy the high-tech ARTLENS Gallery, which boasts a 40-foot interactive touchscreen ArtLens Wall that displays works of art from the permanent collection currently on view in the galleries.

Groups should also mark their calendars for a visit to Cleveland in 2018, when the region will host FRONT International: Cleveland Triennial for Contemporary Art. From July 14 – Septemper 30, 2018, this global triennial exhibition will showcase art from more than 50 local, national and international artists at a dozen venues in the region, including the Cleveland Museum of Art, Museum of Contemporary Art Cleveland, SPACES Gallery and Transformer Station.