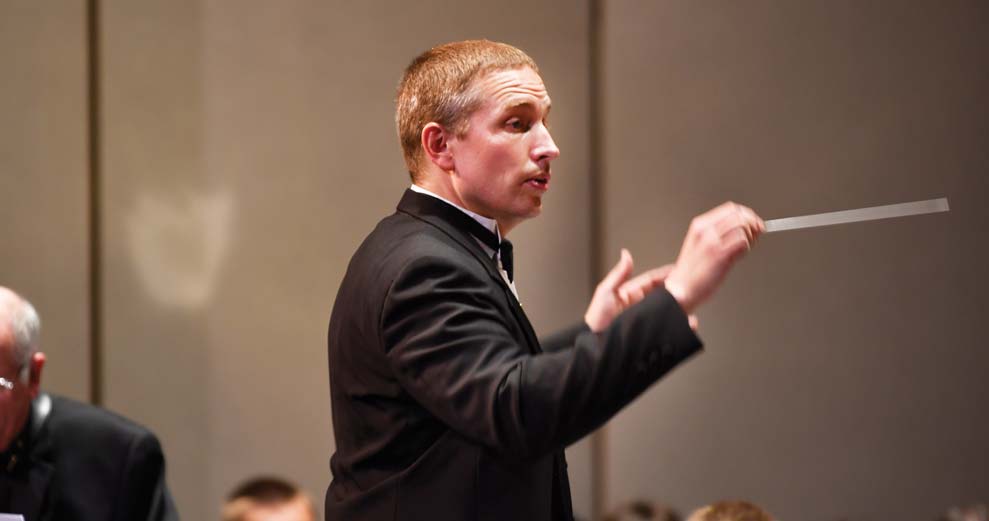 Greg Wells, who’s had the privilege of teaching in the Northview band program in Grand Rapids, Michigan, since 2010, was born and raised in the Northview community. His father, the beginning/middle school band director for 33 years, taught with Max Colley Jr., who established the program’s European tour 45 years ago. As a student, Wells had both his father and Colley as directors.

“With nine music educators in the family, after high school, I wanted to prove to everyone that I could do other things besides music.”

Established as a quadrennial trip, the Europe Band Trip allowed every high school student one chance to participate. The band plays up to seven times in various countries. Typical locations are Rothenburg, Germany; Stans or Einsiedeln Switzerland; under the Golden Roof in Innsbruck and in Mirabell Garden in Salzburg, Austria; and Delft, Netherlands. Wells’ first Europe Band Trip was in 1995, as a student; he went on the same trip again when teaching in DeWitt Public School. Since becoming the Northview High School band director when Colley retired, he’s made the trip with band students in 2011 and 2015 and will do so again in summer 2019.

“I first learned about it when I was about 5 years old when my parents chaperoned the trip—and I had the exciting time staying with my cousins for the two weeks!”

Northview families plan years ahead of time for the trip, which involves multiple fundraisers that change each year. Among the past events were Scrip sales—starting as soon as students begin band in fifth grade, sub sandwich and chocolate sales, a music play-a-thon, and wreath sales. Wells has also enlisted donors to help any students who truly cannot afford to travel. “Often, donors find me. Previous students and families want to give back to students who need help, because they know the impact it had on them or their students.” For many students, it may be the only time they’ll travel overseas.

The family of a Northview student owned and ran Emhage, which arranged that first Europe Band Trip in 1973. Now called Image Tours, it’s part of Northview band history. Wells lauds Monique Kasmauskis—a former Colley student and granddaughter of Image Tours’ founder—and her team as essential to his travel success, noting their “endless patience” and help in organizing the trip and all that goes with it.

“Each trip, they made adjustments to make it better and better. The trip continues to evolve as Image Tours works to find even better experiences for us! They are masters at customizing the trips to our needs.” The memories a once-in-a-lifetime opportunity of this caliber offers his students are infinite. They experience different cultures, food, languages and environments, while traveling with good friends; they see beautiful sights and learn about history and culture.

“Countless people, years later, still talk about it and tell me how life-changing it was—or how it impacted them, but they didn’t realize it until they were into their adult life. Others who travel later in life with family, study abroad and the like say this high school trip is better than any other trips they’ve experienced.”

Wells appreciate the endless ways students, chaperones, parents, drivers, guides and others far exceed expectations. “We talk a lot about what it looks like to have positive relationships with everyone we meet, all the practical ways that could look, and how to demonstrate kindness and compassion to each other. When students get into a foreign country, those skills start to pay off and the trip is that much more of a success.” It’s crucial, he notes, for students to have strategies for living in close quarters for a lengthy time, as even the best friends might get on each other’s nerves.

“Educate your students about your expectations of actions and attitude—especially the relationship in treating one another and trust aspects. That culture you establish well beforehand can make or break a trip when you’re traveling in a group for an extended time.”