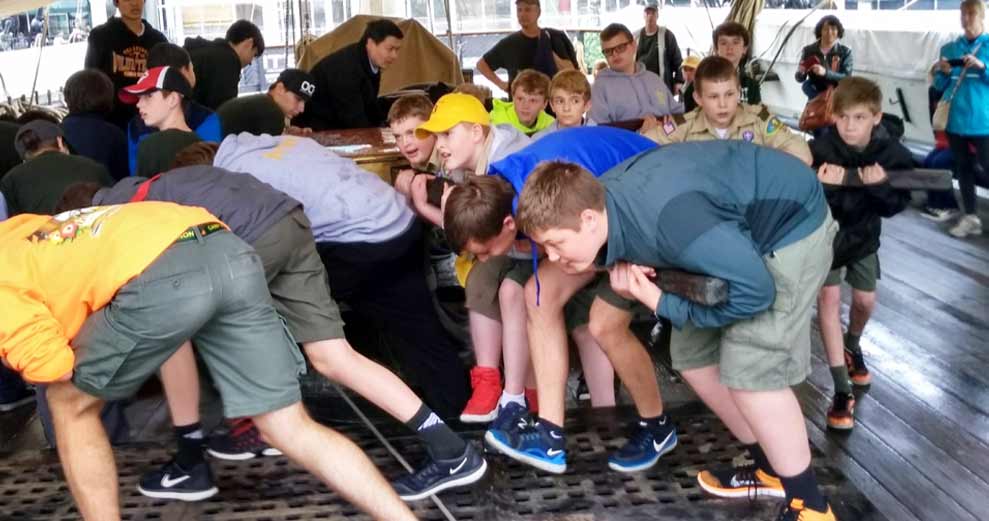 This spring, USS Constellation welcomed aboard new “Ship’s Boys Recruits” from Boy Scout Troop 166 of Rutherford, New Jersey, and Boy Scout Troop 3 of Winchester, Virginia. The Recruits experienced immersion into the life and work of sailors on board the ships during the American Civil War.

Before boarding, the Ship’s Boys of Troop 166 and Troop 3 assembled on the pier to learn the roles of Ship’s Boys in Mr. Lincoln’s Navy in 1862. Chaperones on the program were also inducted as “Landsman” sailors, who would’ve been over 18 but just as inexperienced as new Ship’s Boys. After stowing their gear on board, the Recruits were put to work in the same roles as sailors in the age of sail.

Historic Ships in Baltimore promotes learning through hands-on experiences. USS Constellation was entirely sail-powered, so the equipment on board was man-powered. One of the highlights of the overnight programs was the “Anchors Aweigh” activity using the ship’s capstan—a rotating machine with a vertical axle that multiplies the force of sailors to haul ropes and cargo. When sailors push on spokes, the capstan rotates and pulls ropes wrapped around the axle. The Scouts learned about the STEM topic of simple machines by using the capstan’s pulleys, wedges, and mechanical advantage to raises and lower a barrel of “provisions.”

After also learning to use the sails and rigging, the Recruits built up an appetite. Not only did they work as sailors, but they were also fed as sailors. The evening meal copies traditional 19th-century meals of hearty stew and hardtack—a staple, but bland element of a sailor’s diet also known as ship’s biscuit. Students even sat and ate in the same manner as their 19th-century counterparts: around a canvas mess cloth spread on the deck.

After dinner, the Scouts learned of USS Constellation‘s century of service through a tour of all four decks. The lowest deck, the hold, illustrates the cargo stowage as well as the structure and construction of the ship. The lowest two decks are original to the 1800s.

Each Recruit was assigned a berth for the night in the ship’s original 19th-century berthing deck. They slept just as their 19th-century counterparts did, in a canvas hammock, slowed rocked to sleep by the movement of the ship. After a historical breakfast, Recruits manned battle stations to learn how the ship’s cannons were loaded, aimed and fired. The fiberglass-replica cannons are light enough so a group of 15 students can move the cannon through the steps to fire a gun. After the Scouts successfully worked as a team to give battle using the ship’s cannon, they capped off their stay with a salute, watching a firing of the replica cannon off the main deck.

Historic Ships in Baltimore manages a collection of significant historic vessels that span U.S. history from the mid-1800s to the 1980s and includes USS Constellation, USS Torsk, USCGC Taney, and Lightship Chesapeake. Overnight adventures are offered year-round on USS Constellation, USCGC Taney, and USS Torsk, and each program is an immersive experience of the life and work of the sailors who served. The submarine USS Torsk was in service from 1944 – 1968 and sank the last enemy vessels of World War II. USCGC Taney was present at the Battle of Pearl Harbor and served the Coast Guard until 1986. Historic Ships in Baltimore is open year-round for daytime visitation, with each ship being open for daily visitation.