Where Students Are Encouraged to Get Loud! 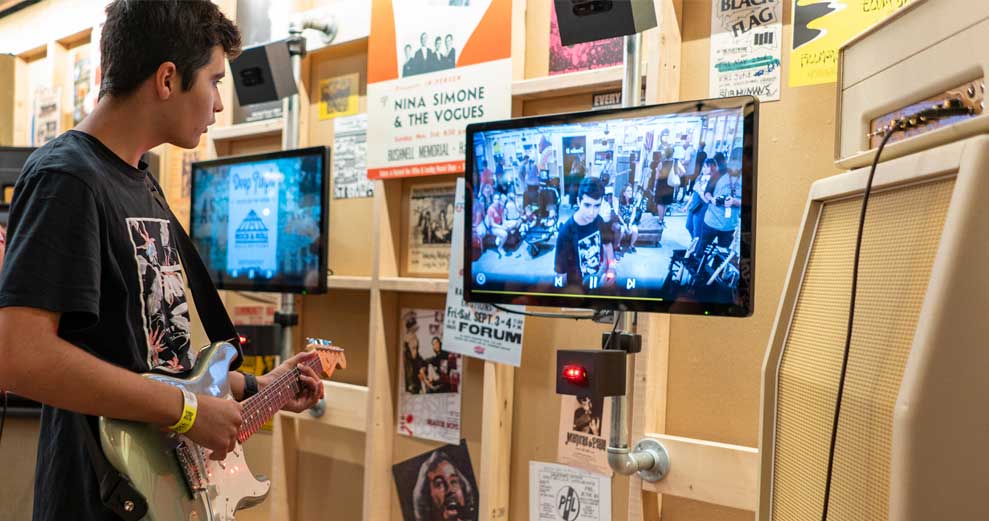 The Garage, which opened July 1, 2019, at the Rock & Roll Hall of Fame, is a great way for music fans of all ages to go beyond the typical museum visit and get the chance to play rock star for a day.

“There’s nothing better than the thrill of cranking up the volume on an electric guitar and visitors can now do exactly that at the Rock & Roll Hall of Fame!” said Greg Harris, Rock Hall CEO & President. “Fans from all over the world have visited the Rock Hall to see and hear how music connects us. Now, they can make music in the museum.”

The interactive exhibit offers easy-to-follow instructions for children and adults to play bass, drums, guitar, and keyboards, even if picking the instrument up for the very first time.

“I think it works as an experience for kids of all ages because it’s hands-on, it’s super fun, and it’s something they’ve seen on TV and onstage their whole lives,” said Mandy Smith, Director of Education. “They’ve seen rock music happen, so to get to experience that is a really special thing that you can’t get most places.”

For more advanced players, The Garage offers a jam room in which the Rock Hall’s multifaceted instructors join visitors in impromptu jam sessions.

“Some of my favorite jams have been the ones that haven’t sounded the best,” says Smith, “Because they’ll be like a 12-year-old son who’s just learning to play an instrument with his mom who’s played an instrument for years, and they’re jamming with one of our Garage musicians and a fourth stranger, and they’re just making music together. And that band would have never happened anywhere else if this garage didn’t exist.”

The Garage allows students to gain a greater appreciation of what the iconic instruments throughout the museum can do.

“Students can gain a playful understanding of the instruments before they go through the rest of the museum and see more,” said Smith. “And I think that those instruments then have even more meaning to them, because they have played them and beaten them and strummed them.”

In this new space, teachers can rest assured knowing their class can touch these real instruments without worry of busting drumheads or breaking strings—and they will be encouraged to get loud.

Several musicians who have visited The Garage have expressed their pleasant surprise at the high quality of the instruments. But there is a method to the madness, Smith says.

“We wanted that authentic experience for everyone,” said Smith. “Not just for seasoned musicians, but for kids. Because when they have seen rock ‘n’ roll throughout their lives, they’ve seen the real deal—real musicians with top-notch gear. So, we want their first hands-on experience to be just that.”

Content and photo courtesy of the Rock & Roll Hall of Fame.