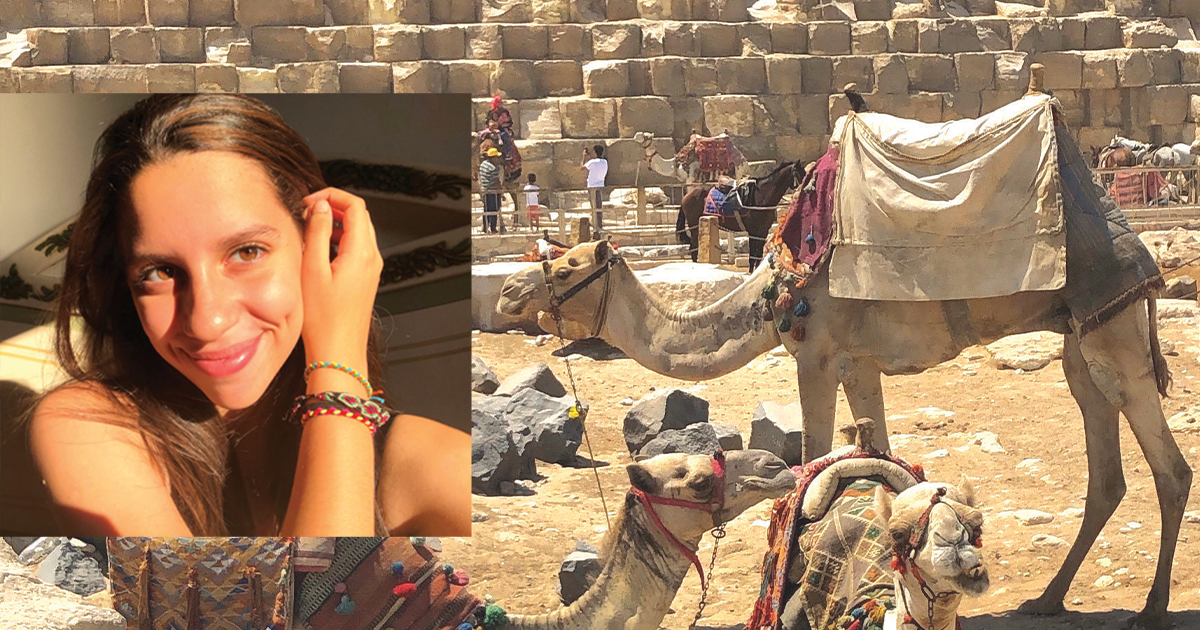 “They’re just a pair of white Converse,” my mother tells me. Behind her, I sulkily gaze out of the dusty car window, endeavoring to translate the Arabic billboards in an attempt to distract myself from the recent ill-fated event. She turns around in her seat to gaze at my freshly purchased white Converse, the ones that I procured a week before this trip to Egypt.

Except, they are no longer fresh or white. My mother’s stare captures my attention, and I look down at my white Converse, now sporting cherry-red stains ranging from minuscule dots to quarter-sized splotches. I think back to the catastrophe that engendered such devastation, and it replays in agonizing slow-motion.

The flight attendant pushes the drink cart along the narrow aisles. My mother orders cranberry juice, which she recently developed an obsession for after reading a Facebook post about its tremendous health benefits. The plane experiences turbulence. The cup shakes, splashing its contents in droplets that land in perfect precision on my shoes. My mom reflexively reaches forward and completely spills it. Panicking and frantic accumulation of tissues and whisper-yelling and … oh, it’s too painful to recall.

“We’ve reached the bathroom,” she informs me as she opens the car door. I reluctantly follow, and as I exit the air-conditioned car, I am greeted with the humid desert air that makes me regret my decision to go with her, but I continue walking. As I wait outside while my mother enters first, I notice a crouched figure near the end of the street. Squinting, I realize it’s a boy, no older than six or seven. He turns around and notices me staring. I quickly look down in embarrassment, ashamed to be caught staring. When I look back up, I see him waving. Glancing between the bathroom door and the boy, I start moving closer to him, taking in his ash-covered skin and how his clothes cling incredibly tightly to his body.

When I finally reach him, he speaks. “Enty Amricaneya?” Are you American? “Aywa,” Yes. “Araft Izay?” How did you know? He looks down at my feet. Shrugging as though it were the most ordinary answer, he tells me, “Inty tiflah. Mafeesh atfal hena andohom gezam.” You are a kid. No kids in this area have shoes. For the first time, I look at his bare, faintly scarred feet covered in recently popped blisters around his toes. I remain silent as he continues to gape at my own shielded feet, and as I examine the yearning in his eyes, I feel remorseful over my earlier outburst.

Kneeling next to him, I begin untying my red-stained shoelaces and slip off the Converse. I place the pair in between us and he looks up in wonder. “Hedeya,” I say, pushing the shoes closer to him. A gift. He smiles widely, showing off his missing left front tooth, and nods. I begin treading back in the direction of the bathroom, untroubled by the sting of sand scraping across my socks. To me, they’re just a pair of white Converse. But to him, they allow him to walk a happier path.

This essay was a finalist in the World Is A Classroom essay contest. It was written by Kenzy Elshazly, 16,  a junior at Columbia Secondary School in Long Island City, New York.