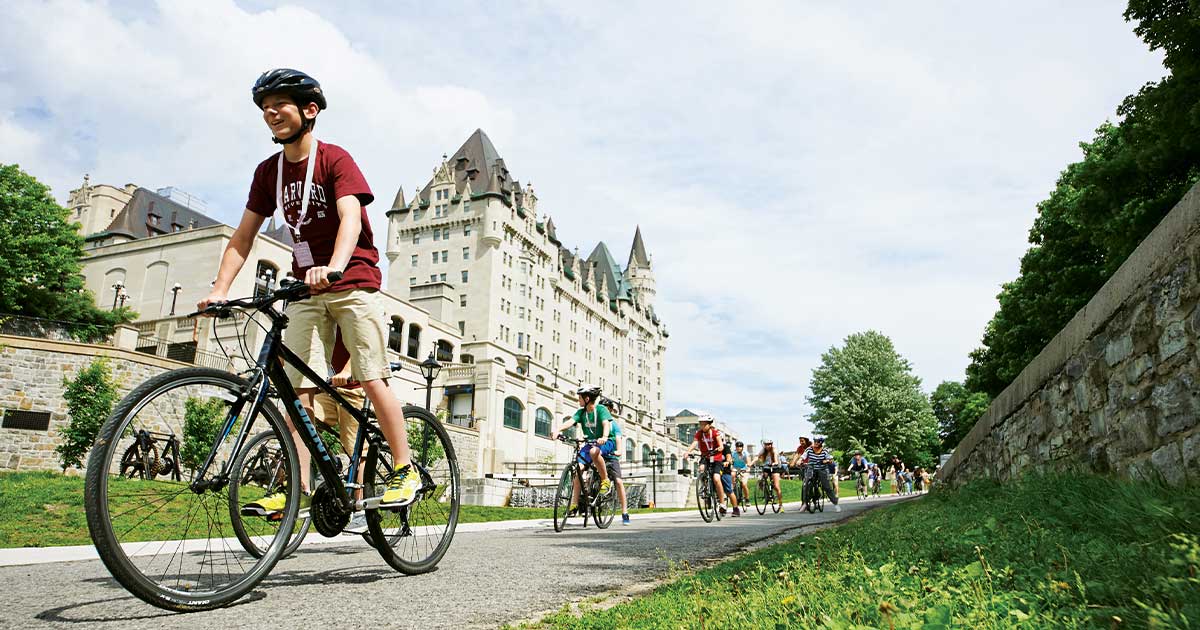 Ottawa, Canada’s beautiful capital city, has long been the country’s most popular destination for student travel. Here are the top 5 reasons why Ottawa is tops with students and teachers.

As the nation’s capital, Ottawa is home to accessible national sites and landmark monuments that tell the stories of Canada and its people. From Parliament to the National War Memorial, the Supreme Court, Rideau Canal, and many more – Ottawa opens students’ eyes to all things Canadian.

Ottawa is located on the traditional and unceded territory of the Algonquin Anishinaabe people, whose continued presence is celebrated at two Indigenous attractions. Indigenous Experiences welcomes student tours to its reconstructed Indigenous village located next to the Canadian Museum of History, where they learn about traditional skills, dwellings, food, music and dance. The same organization runs Mādahòkì Farm, a new attraction that celebrates the enduring connection of Indigenous people with the land and offers a wide variety of workshops, a market, and seasonal festivals.

3. A museum for every interest

From Canadian history, to science and technology, aviation and space, art, agriculture and food, nature and war – seven national museums offer students and teachers the opportunity to supplement learning and knowledge across a wide range of interests with interactive exhibitions and experiences. Local museums include one that tells the story of the construction of the Rideau Canal, an underground Cold War bunker, and a local art gallery

Looking for fun and adventure in the great outdoors? Ottawa does not disappoint. Spring through fall, cycling tours top the list for student groups, with over 800km of recreation pathways crisscrossing the city and surrounding countryside. For the more daring, there’s ziplining across the Ottawa River and in the Gatineau Hills, aerial parks, and white water rafting. In winter, there’s skating on the Rideau Canal Skateway, the  world’s largest naturally frozen skating rink, plus cross-country skiing in the city and downhill not far away.

Ottawa is a city of celebration, with festivals and special events throughout the year that can add a whole new dimension to student visits. Winterlude in February celebrates the most quintessentially Canadian season, with skating on the Rideau Canal, a giant snow playground with slides and ziplines, ice sculptures, and kid-friendly activities galore. The Canadian Tulip Festival in May is an Instagrammer’s delight with a million blooms and a fascinating backstory on their origin. During June, it’s the Summer Solstice Indigenous Festival – the biggest of the year at Mādahòkì Farm.

Autumn brings Fall Rhapsody, as the vibrant colors of autumn enliven tours to Gatineau Park, and the solemn marking of Remembrance Week during early November. The year wraps up with the dazzling Christmas Lights Across Canada brightening the long winter nights with displays on the Parliament Buildings and across downtown, and the Ottawa Christmas Market at Lansdowne Park.