Looking Behind the Emerald Curtain 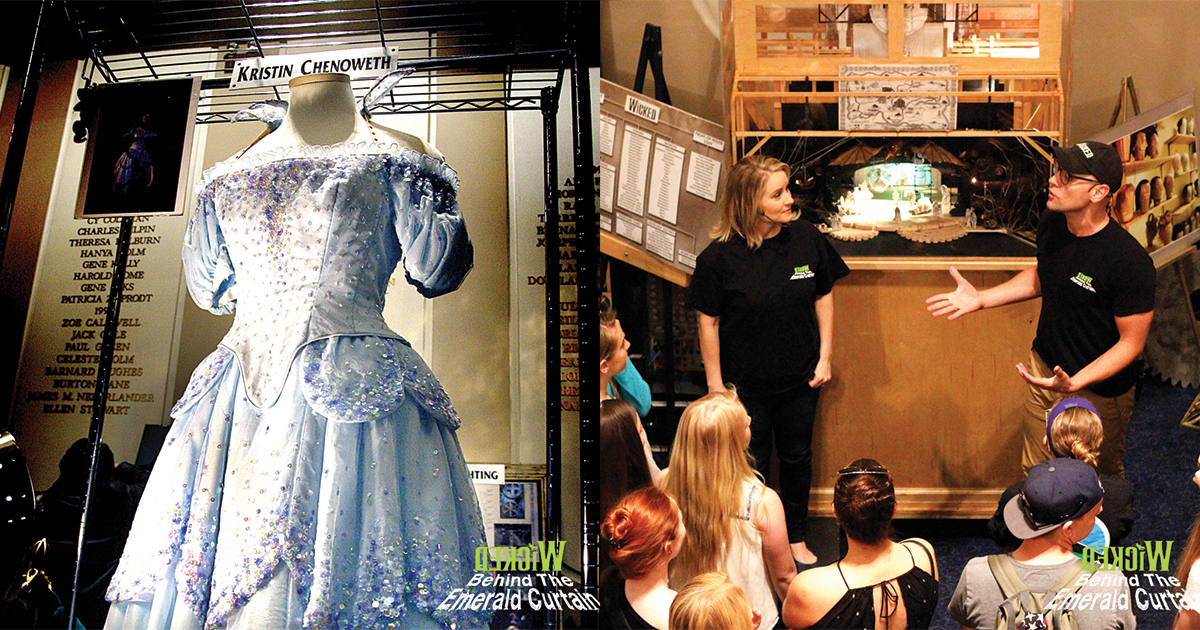 For 20 years now, Wicked has inspired, entertained and delighted audiences around the world.

As one of today’s most successful Broadway musicals, it deserves a behind-the-scenes experience to match. Enter “Behind the Emerald Curtain,” an exclusive behind-the-scenes look at Wicked, great for diehard Broadway fans and newcomers alike.

We talked with the people behind Behind the Emerald Curtain to find out what makes this experience perfect for student groups.

What does Behind the Emerald Curtain entail?

Participants take a guided tour through our Behind the Emerald Curtain Museum, which includes an elaborate set model by Tony Award-winner Eugene Lee and an up-close look at some of Tony Award-winner Susan Hilferty’s costumes (with beautiful details that are not always visible from the audience), as well as actual props and wigs from the show.

Behind the Emerald Curtain also highlights the work of the 125 people it takes to make every performance of Wicked happen. Each event concludes with a Q+A session with cast members, where you will have the opportunity to find out more about Wicked specifically and show business in general.

What do you see students getting out of it?

Student groups are able to have a fun, educational experience before seeing Broadway’s biggest blockbuster! It is the opportunity to learn more about the theatre, beyond what is seen onstage. There are insights shared of multiple careers in the performing arts for students of all skill sets—backstage and front-of-house, as well as the craft industries that make Broadway so spectacular.

Do you have a particular memory that stands out?

“My favorite happened at the very first time we did Behind the Emerald Curtain. A fan ran in as soon as we opened the doors, ran directly to Idina Menzel’s Wicked Witch/Act II dress, and promptly burst into tears. She so loved the show and the costumes, and the idea that she could see this one in particular up close was overwhelming to her.

I can’t say we have that reaction very often, but patrons do come away with a much better idea of how many elements make up a musical of our size, and some hints of things to look for in other shows they see in the future,” says Susan Sampliner, company manager.

What makes Wicked a great show for today’s youth?

At Wicked, students will experience a show with a heartfelt story about friendship and finding your own voice, along with a compelling score and dazzling effects. As relevant as this story was when the show opened in 2003, the message rings even more true today, in a polarized and divided country, where those who are different may receive discriminatory treatment and lesser privileges. There are many themes to bring back to school for further discussion after seeing this show, for students of all ages.

Group rates are available. Behind the Emerald Curtain is a perfect add-on to your show experience, or as a standalone event. To book a group of 15 or more, contact 321 Group Sales at (877) 321-0020 or [email protected]